The first of the year I set a simple goal – stitch every day. Today is January 24, and so far I’ve stitched every day except one! Great progress toward my goal!

It’s a little different for me since I don’t have projects kitted up ready to start, so when I finish something I have to scramble a little to start the next thing. And, I don’t have multiple projects going at once so it’s not as simple as choosing a work-in-progress to stitch.

So, I finished Symphony in the Autumn colors suggested by readers: 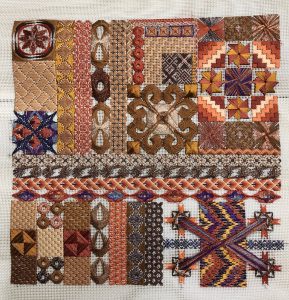 OK, it’s not the beauty shot that Rod will get later after it’s all framed and mounted. But you get the idea!

I finished Symphony while I was away teaching for Canvas A Needlepoint Adventure. Fortunately, I was anticipating finishing so I had brought materials with me to start the next project.

And I have a tiny confession to make: I decided that preparing the canvas to stitch would count as stitching for that day. I assembled the stretcher bars, tacked everything in place and got it nice and tight ready to stitch the next day. In my defense, I was exhausted after teaching all day, then an outing with the retreat members. I figured mounting the canvas was as good as it was going to get that night! Plus, I had decisions to make about starting and which threads to use. I admit that I was too tired to make decisions! But I did stitch the next day.

Guess what? My simple goal of stitching every day has netted another finish! 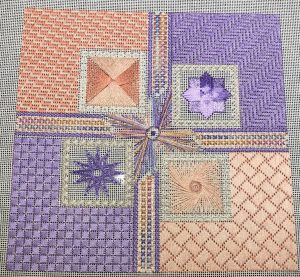 This is Indie Pop, and I’ll describe it in greater detail later. I made great progress on this piece, since I started it 11 days ago. During that time, I’ve been coping with an upper respiratory something that has made life very uncomfortable and unpleasant. But, except for the day I traveled home from Canvas, I stitched every day! Some days it was only for 10 minutes, but hey – that counts!

So one came off the stretcher bars, another one is mounted, and I’m ready to continue stitching. Let’s see how much I get accomplished this year!

This entry was posted in Uncategorized. Bookmark the permalink.